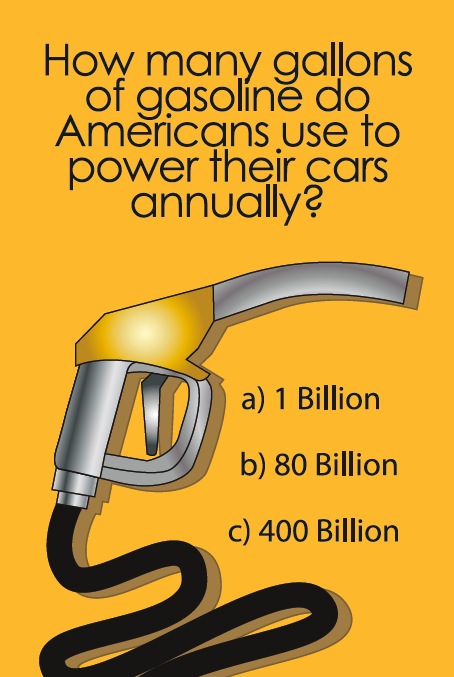 How much gas does it take to power US cars annually?

How much gas does each car use?
How many cars are on the road?
How many miles are driven each year?
How many gallons are needed to drive those miles?

How many people are driving?

When estimating a quantity of this magnitude, it is best to lean on rules of thumb or benchmarks. If Americans start driving at age 16 and on average live until they are 80 years old, 4/5 of the population are of driving age at any time. This estimation has all sorts of bias issues, but is simply a good place to start. Don’t get too bogged down in the details when you are calculating a quick estimation.

Do all of those of driving age have a car?

This is up for a great deal of debate. Depending on the source, you’ll find that there are 62,000,000 cars registered or 250,000,000 cars/buses/trucks registered. I prefer to base my estimate on a percentage of the population before further digging. S0 consider those around you and extrapolate. Does everyone of driving age around you have a car? Do some families with five members over 16 have only one car? My guesstimate is 60-80% of those of driving age have a car. Yes, some have 2 or more, but those individuals with 2 or more don’t have significantly different total annual mileage from the rest of us, so we won’t worry about their extra cars.

Let’s us 60% as our low end estimate of the portion of the driving-age population who have cars.

This is right in between the two extremes we found while researching (62 Million and 250 Million). Insurance companies base their models on drivers driving approximately 12,000 miles per year. For those of us from large states such as Texas, 12,000 seems like too few, but it breaks down to approximately 250 miles per week or almost 35 miles a day. Sure some have commutes much greater, but others have commutes much much shorter.

The average car gets 20 miles per gallon.

If you were looking for a range, use 62 million autos and 240 Million autos for your low and high ends. Your range for gallons used: 37.2 Billion to 144 Billion gallons of gas. 80 Billion is within an order of magnitude of 2 from each end of the range.