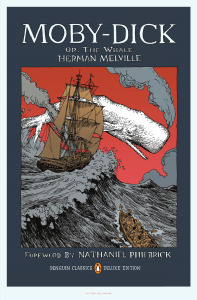 Overview:  A story about a whaling captain seeking revenge on the mammal that was responsible for his lost leg.

Chris: “Everyone has a white whale. Read this book for the adventure and the poignancy of chasing something that is uncatchable.”

Ethan: “Jay Gatsby had Nick and Captain Ahab had Ishmael. It’s the starry-eyed narration and companionship of Ishmael that gives readers such and intimate look into the troubled mind of the great Ahab and his battle with the whale.”

Rebecca:  “It’s true that Ahab has his obsession with the white whale, but what I found fascinating, is that of being led by a person who is willing to sacrifice everyone and everything to his pursuits.  And you can’t leave.”