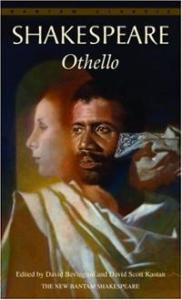 Overview: A tragedy about betrayal.

Chris: “How far would you go if you thought the person you loved had cheated on you?  The best exploration of betrayal, from both lover and friend, ever put on paper.”

Ethan: “Of all of Shakespeare’s great tragedies, Othello is by far the most personable. The actions on stage do not happen to a king or an emperor, but to an everyday man facing the corrosive dangers of jealousy.”

Hannah:  “There’s a struggle with liking Othello. I’ve always loved Shakespeare’s tragedies much more than his comedies. It’s weaker than his other tragedies – the characters aren’t as well developed, the plot is thicker, the themes aren’t very interesting. BUT! Iago is pretty much the greatest antagonist of all time. He’s so ridiculously corrupted and has such bizarre goals. Reading Iago and how people react to him is just crazy.”