Make sure you have the fundamentals down before taking the GMAT.

I took the GMAT for the first time today and scored a disappointing 610 (Q45, V28). I was particularly shocked when I saw my verbal score. Despite being a non-native english speaker I scored V41 and V39 on my two GMATPrep tests (I did the two tests as closely as possible to exam conditions, with IR and AWA). During the verbal part I felt a bit “rushed” and I ended up with 14 minutes left to finish the last 4-5 questions.

I am going to retake the test in early January and thus would like you opinion on the following points:
– How can I explain the low verbal score? Can overconfidence be the reason of such a low score? Is V28 my true verbal score?
– Since I will have some time to practice until I retake the test, what is the best way to move from Q45 to Q47 and above?

Thank you very much! 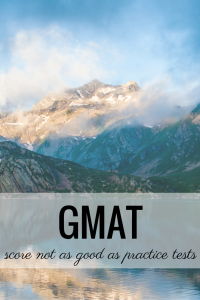 Wow, that is a dramatic hit to your verbal. I’m a bit confused by the statement that you felt rushed with 14 minutes and 4-5 questions. 14 minutes is MORE than enough time to answer 7 questions, and certainly enough for 4-5. If you recognized any of the questions when taking the GMAT prep, the 28 may be your true score. Given how close your GMAT prep tests are you either 1. have seen the official guide/gmatprep material so many times that you have (accidentally?) memorized it and so the 28 is likely true, or 2. you didn’t shake the stress off from the first 2/3 of the test and lost your cool on verbal, in which case your true ability probably is closer to V40.

Which case are you?

RE: explaining low verbal – Don’t. You are retaking. Make sure that you are well above the V28 and you will not have to explain the V28. A business school is only concerned with your top score. Make sure January will be better than November and you can forget about Nov. The Nov test will be written off as a blip.

If you do not increase the verbal score, you won’t score more than 650 no matter what your quant score is. At which point, you won’t have the opportunity to explain the verbal – you’ll have a hard time making it to the interview round at top 10 programs . . . unless of course you are an effing rockstar.

RE: Pick up quant – work on connecting problems. How is this problem like 67 and 93 and 112 and 125, etc. Draw a network of how problems resemble each other and you’ll see that the GMAT is mostly concerned with testing your logic and flexibility. Sure, a quant jock can crush you with his/her mastery of problem solution paths memorized over the years, but you can’t dial back to 3rd grade to start training with the Physics team. So instead, win by looking at the problems in terms of Number Theory, Boundaries and Constraints, Mechanics, and Geometry. Most problems are hybrids of those areas. Don’t worry about memorizing a formula chart. You probably remember all you need: area and perimeter for round things, three sided things, and four sided things.

You may have noticed I now have a GMAT hotline open for 15 minute sessions. All sessions are (online and over the phone) with me – office hours. Verbal, quant, apps, happy to help however I can. https://www.prepwise.com/gmat

Three Big Lessons to Boost your Score on the GMAT