It is difficult to find a text to ignite enthusiasm for basic economics. Lack of training in the basics leads to all sorts of perverse incentives when it’s time to vote . . . but if you really reconsider the fairy tales we gave you as a child you may see the beauty of basic economics.

If you think about it, what is the Three Pigs really about? Is it just a jumble of portly pink farm animals running about or is it a lesson in investment and return on that investment? Pig #3 builds a brick house. That took significant time and money. Pig #1 built a house of straw – like most start-ups, here today, gone tomorrow, but he could build it quickly. Pig #2 thinking he improved on Pig #1′s concept without the burden of Pig #3′s concept builds with sticks . . . which really proves to be nothing more than heavy straw – much like a start-up with “seasoned professionals?” 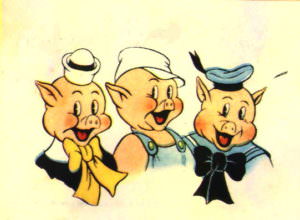 On the simple math side, the Three Pigs introduces the concept of cost / benefit analysis as well as perseverance with harder path in the face of seemingly quick fix solutions. So what do you choose? Build with brick or go for straw and hope your Brick brother will bail you out….

This is one of my favorites as it is used constantly . . . incorrectly.

Not to strangers. But to the people from whom the money had been taken. You didn’t pay in, you didn’t get money back.

Rob from the rich to give to the poor? Yeah, that’s not what happened. Read it again.

Tortoise and the Hare

The way this story gets shared is just plain offensive. How many times have you heard “Slow and Steady Wins the Race”?

When has that ever been true? Have you ever watched a race . . . that’s not how they work.

So what’s the real scoop? Tortoise and Hare start at the same time. Hare jumps into a huge lead and then decides to take a nap. The Tortoise wins.

The Tortoise didn’t win because he was slow. He won because he kept his focus. The Hare flaked out. The story is about FOCUS not speed. The Tortoise won in spite of his disadvantages with speed. Focus. Focus leads to winning. Another way to put it, that long term personal project that’s so hard to do and not immediately rewarding (but you believe it will pay off in the long-long term), stick with it until it is delivered. Keep your focus and stay on the path.