For students not “in the know” they think the Bschool process is just like getting into college. Bschool Apps are more than filling out applications and doing well on essays. Here’s how Bschool Apps involve improving GMAT scores for top 10 MBA acceptance.

Applying to Business School:
1. Sign up online.
2. Fill in application.
3. Bang out the essays.
4. Press submit. 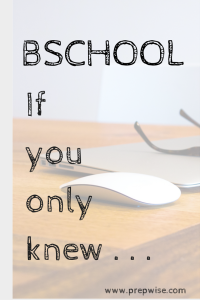 Those who graduated from a competitive high school where Tiger Mom* looked like a tiger lily know that the process starts long before alerting the school that you will apply, step 1 above.

I asked two successful students from very different backgrounds what they wish they had known before and during the application process. Names have been changed so you can’t cyber-stalk my students. Both of these candidates ultimately chose to make career moves rather than accept offers despite competitive outcomes. Each candidate created a bigger immediate opportunity by going through the application process.

1: What do you remember as steps in the application process, even long before you met me?

The biggest step in the application process before meeting you was deciding (somewhat impulsively) to go to business school. I’d been considering other Master’s programs and frankly didn’t think I had the math skills to ever make business school a possibility, but after realizing how little value they would add to my pursuit of a fulfilling and lucrative career, I came to the conclusion that barring a sudden interest in science, I’d need to go to either business or law school to find the type of job I knew I eventually wanted. With a family full of lawyers who have spent their lives telling me not to go to law school, the choice to pursue business school was relatively simple, even with the daunting prospect of the GMAT. By the time I decided, I had to start studying for the GMAT pretty much immediately, so I didn’t have much time between making the decision and starting the process.

To me, the business school process appeared at first blush to be very linear.

Study for the GMAT, get a good score, apply online, write the essays, get your recommendations, interview, and then get accepted.

When I took the Manhattan GMAT courses, I learned a little more about the process from reading the MBA admissions book that came with all the MGMAT materials. That is where I learned more about profiling/making sure your essays line up with your recommendations, etc.

While working with you I began to fully appreciate that the bschool process is not a linear progression and requires significantly more self reflection and strategy than I had initially thought after reading the books. The essay portion is difficult and mentally/emotionally draining. The “why business school/why MBA” thought mapping process we went through was something that was much more involved than I had initially thought would be based on conversations with my older colleagues who had applied/attended bschool before.

If you have significant holes in your profile (like I did/do), you need to be willing to change your application strategy as you go through the process, which can be disheartening. It was tough for me to watch the Round 1 deadlines go by after having planned on submitting before them, but ultimately I think spending a few more months to get the GMAT taken care of was definitely the right move for me, and it stopped me from having to write essays while simultaneously studying for the GMAT, which I’d recommend avoiding if possible. 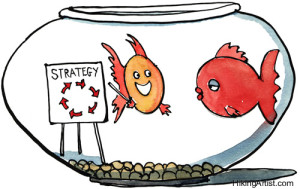 As far as delightful, as much as it doesn’t seem like it in the beginning (or even at the time, ever), you do get better at writing essays or solving data sufficiency problems or whatever else is rough for you in the process the more you do it. One of the things that I think will really help me when I reapply is simply the fact that I’ve gone through this process once already, and so I have a much clearer vision about what points I need to hit on in my essays to make my profile more compelling. As much as I hate to admit it, there is a bit of truth to the idea that the application process is a time for some deliberate self-reflection on behalf of the applicant. If you keep that in mind, you’ll get something out of it, even if you don’t end up going to business school in the fall.

Unexpected:
– I didn’t think that the GMAT would give me as much trouble as it did.
– the amount of real quality thinking time that is required to really get at the root of why I wanted to get an MBA
– the amount of time needed to reflect on my experiences to date and how they can be applied to bschool
– realizing that bschool can be different things to different people

Delightful:
– the self reflection
– the fact that you are available almost 24/7

Part 2 addresses What helped and what did not help in the application process.
Part 3 addresses Where to go for more information and what they would tell candidates before beginning the bschool process.

*With apologies to Amy Chua. You are no resting Lily.

Bschool Apps – What I wished I had Known Part 2

Bschool Apps – What I Wished I Had Known Part 3