So what’s going on with the girls? Isn’t it supposed to be easier for girls to get in? 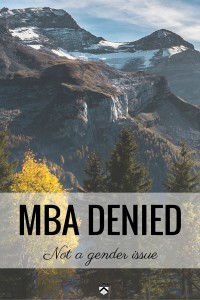 I received a frantic phone call yesterday . . . a former student who won’t be applying for at least another year called to ask why strong work experience, 740+, female candidates were getting deferred to later rounds or denied and if the girls were getting turned away, could he even have a shot at admission in a year or two.

Good news is, you are you. If you write your application appropriately, you will shine through. It isn’t worth comparing yourself to someone else. Most decisions at the top programs are not that linear. Many students fixate on the objective pieces of a very subjective process and draw the wrong conclusions. The GMAT is important, but it is only one piece of your application. That’s why I offer full service bschool advising. From school selection to GMAT prep to essay brainstorming, it all seamlessly builds to expert application execution. An excellent application is how a sub-600 student can land in a top 3 program, but the 710 student doesn’t even get an interview.

So what’s going on with the girls? Isn’t it supposed to be easier for girls to get in?

Contrary to popular belief, it is not easier for similarly talented women to gain admission at the very top programs. There are enough highly qualified women to fill the top programs many times over. If you only consider qualified candidates (i.e. scrub the application list of the Hail Marys*), the acceptance rate is pretty similar for male and female applicants. Fewer females submit Hail Mary applications.

When you are deferred to a later round it often means that the school likes you marginally more than a waitlist candidate. But, you are likely to be at the bottom of the applicant pool each round you roll to so . . . maybe you get an admit, maybe you get knocked out all together.

The one gender divide that I’ve witnessed more commonly is what gets invested in the bschool process. There are plenty of women who do go for tutoring and application help, but women are more likely to take a public class than private lessons.** Women are more likely to put their applications together and have friends/family help with edits rather than hiring a professional. As a consequence, a strong female candidate’s application may lack the polish of a similarly qualified male candidate. It’s hard to say yes, even to a 740+ female applicant, when you know the application could have been written better. This is business school. We expect to prepare the next generation of business leaders. 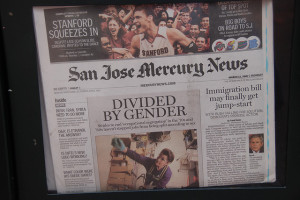 Is that the best you can do?

So deferrals, dings – New Bschool Trend? Anything to be worried about?

All part of the natural cycle. To all, if you’ve been dinged and want feedback, leave a comment below with your stats (yrs of work, GPA, GMAT), the school and any comments the school had for you (most won’t say anything). I’ll reach out to you privately by email to schedule a 15 minute chat if I think I can shed some light on the situation. Be prepared to email me your essays.

*Hail Mary(s) – that last ditch attempt to score against all odds. AKA the throwaways. If you throw in an application to a program you believe above you, “just in case,” you have thrown a Hail Mary. Be intentional. Step up.

**While at MGMAT, my tutoring clients skewed heavily male, 80/20, but my courses were frequently 50/50. Women who came in for tutoring would also tend to spend less over the span of the tutoring relationship. Now in private practice, my students are close to 50/50 and approximate the same total spend. Mind you, my private practice shows a lot of self selection on the part of the students and my vetting before we engage.