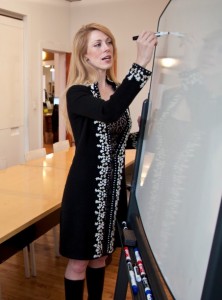 Call me Kate. I’m the Chief at Prepwise, responsible for course creation, student engagement and all the “fun” of running a company. We build smarter, stronger Business Leaders.

You probably know me from one of your friends. Or frenemies. Or your boss (I’ve been at this a while). With almost 3000 individual tutoring students, there’s a good chance you know a former client. I specialize in helping you create a positive career trajectory with all the steps in between. Let’s get you out of career ruts and the quarter-life doldrums.

“Makes me wonder if she has a crystal ball….” –former client

VISITING STUDENTS: Many students travel to NYC in order to work with Kate. While we cannot support your visa directly, we have found that visa support is not necessary to complete our programs. Please visit with your consulate for clarification.

Want to kick the Tires? Try one of the MBA Prep online courses.

Preparing for the GMAT involves both learning and refinement (aka clean up). Learning is a process of discovery. As such, it isn’t linear. Linear approaches to non-linear challenges get you mediocre results. Most test prep companies teach the same lessons to their students. That’s what I was asked to do at ManhattanGMAT and it was okay for students who really just needed refinement. But their student population changed and their methods did not. Prepwise is my chance to fix that.

My goal is to create the greatest impact in the shortest amount of time for you. It’s important to make this distinction, because if you want the same 15 lessons your friend got, you might not enjoy working with me. I teach every student the number line, and I haven’t taught it the same way twice despite a few thousand students. That’s also why I no longer do small group lessons. I have large classes and one-on-one sessions. That’s it.

My students do better than they even realize they can and often in a shorter time frame than they would expect. We always run at your pace, but you can run a lot faster than you think. Our Median Score = 750, median time to completion = 8 weeks. Our average score was 727.

But what the average hides is a few students who make almost no progress or really flame out on test day. That hurts to see. You don’t want to be that student. But it can happen. You should know that. The good news is that almost everybody reaches his/her potential, and that potential is far greater than you may currently expect of yourself.

Sam (name changed) is a great example. She spent 40 hours in tutoring over 6 months working with my former colleagues at MPrep (formerly known as MGMAT). Her score improved from 570 to 640 and she was told that would be as good as it gets. Her tutor was convinced that she would not be able to do better and that she should set her sights on lower tier MBA programs. Then she came to me for the Private Evaluation.

“Wish I had done it (private evaluation) sooner.”

Within the first 10 minutes I predicted that her score could be 710-740 if she were willing to do the right work and that she could be done in 2 months. True to form, 8 weeks later she sat for the test and scored 720.

She was willing to unwind the bad habits she had acquired elsewhere and was willing to learn new skills. Her path is unique but her outcome is normal. Stop settling for second best.

“I ended up getting into, not one, but two of the top business schools”

“Kate’s consistent mentoring has been integral to every step of my MBA application process. I have found that her advice is always spot on. It often makes me wonder if she has a crystal ball specifically designed for business school applicants.

I met Kate shortly after my second GMAT attempt, which was again less than desirable. I was simultaneously struggling with the MBA application process.

I worked with Kate for 10 sessions to strategize my GMAT attack plan. After working with her, I was able to reach my goal by achieving a competitive GMAT score.

Kate also helped me carve longterm career goals, which were unique to my experience and personality. My final essays were genuine and from the heart. I received comments from both my interviewer and a member of Adcom about how diverse and interesting my long term goals were.
Not surprisingly, I ended up getting into, not one, but two of the top business schools. One of them even included a merit based scholarship!!”
– Private tutoring student

“… amazing in and beyond the classroom!”

“I did it!! I scored 730 this morning with 68th percentile in Quant and 99th percentile in Verbal. I’m super happy and really wanted to thank you for your help and support, you’ve been amazing in and beyond the classroom!”
– Course student

“… by far, the best instructor I’ve worked with”

“Just wanted to thank you again for taking the time to work through my GMAT problems. You were by far, the best instructor I’ve worked with, in regards to standardized testing.”
– Private tutoring student

“Kate – I wasn’t sure the right way to send this but hopefully this makes it to you. Wanted to say thanks for a great class. I learned a lot of great strategies for the test and felt pretty prepared. I just took the test yesterday and was happy with my results – I got a 720. Thanks again!”
– Course student

“Great meeting this morning – seriously, you should consider being a life coach / I totally feel 100% pumped after tutoring. Partially because its basically like you are going through random dark rooms in my brain and flipping the light switches on. ”
– Private tutoring student

“… literally tailored to the person”

“I never thought about getting a tutor OR hiring a b-school consultant prior to getting advice from my boss about it. I took MGMAT and thought that would be the only thing I needed. Only after asking xxxxx did I find out that she used you and then she made the connection.

I thought the personal evaluation was very informative – both on a GMAT and “How Business Schools View Your Application” perspective. I read the mbaAdmissions book, but, I thought your ability to articulate the logic and provide the insight was much more impactful. I don’t think most people who haven’t done 1 on 1 tutoring before know what a HUGE difference it makes.

To be honest, I thought the $5K for tutoring for a month was too expensive – it just sounded like a lot of money. Naturally, I went out and sought a less expensive alternative. I went w/ a recommendation of a friend and was less than enthused (you get what you pay for?) – I don’t think most other tutors have as much depth of experience as you do.

My advice to anyone thinking about hiring you…whatever premium you are charging to the market is worth it. I think on the tutoring side – the person is paying for 1 on 1, a pretty adaptive teaching methodology, GMAT strategy that is literally tailored to the person, and I think your office space is very nice. I can say that I’ve met with you about 6 or 7 times and I can see the results. Believe me, if my GMAT score improves to even close to where you predict, I will sing your praises to any and all of my younger PE classmates who are coming up on the end of their 2 yr PE associate gigs.

I also think your word of mouth/referral marketing is pretty awesome. It’s kind of like hearing about the party in Soho at the bar..that doesn’t have a sign or an address on it. I think it sends a strong message that you can pick who you want to work with.”
– Private tutoring student

“I started with a 420. After 7 months, I scored 720… Kate is simply extraordinary.”
(translation from the Russian)