Favorite moments in SAT history, aka why some people say SATs and others say SAT.

Let’s dial back to the dark ages of the SAT. The year is 1926. And it turns out – your (Great) Grandparents really did walk uphill both ways . . . at least when it came to the SAT.

Imagine this, the scored portion of first SAT contains 313 questions to be completed in 97 minutes and “Is designed primarily to assess aptitude for learning rather than mastery of subjects already learned.” The test was scaled so that 500 was the middle score for the group of test takers. 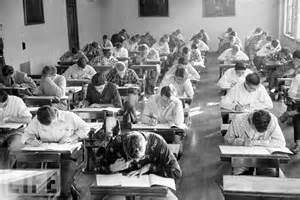 1941 The reference curve for verbal was created to make a 720 this year comparable to a 720 any other year. Math had been dropped so . . .
1942 Math is reinstated and the reference curve is created. These curves will persist until 1995.
1968 The University of California requires the SAT for admission, an effective way to reduce the number of eligible Baby Boomer candidates.
1975 More women than men take the SAT. Still holding strong through 2013.

“It is time for an admissions assessment that makes it clear that the road to success is not last-minute tricks or cramming but the challenging learning students do every day,” – David Coleman, President of College Board

So why do you say SATs and I say SAT?

In the heat of the scoring shenanigans, the SAT attempted to re-brand. A few times. Like New Coke in the 80s. Similar results.

March 1994 the SAT became the SATs with SAT I and SAT II and the S. A. and T now mean “Scholastic Assessment Tests” rather than Scholastic Aptitude Test (since 1926). In 2004 the I and II are dropped in favor of SAT Reasoning and SAT Subject Tests. The SAT Reasoning is now appropriately called the SAT. So if you’re calling it the SATs, you were in high school between 1994 and 2004. That’s useful for bar trivia and Jeopardy.

Big thanks to Erik Jacobsen for pulling together the rich history of the SAT and ACT. For even more information, visit his full timeline here: http://www.erikthered.com/tutor/sat-act-history.html