College admission rates are at an all time low. Stanford and Harvard are under 6%. With acceptance rates like this, families are asking what to do and what happened. Even 10 years ago Elite schools were accepting 10-20%.

Here’s my take on the situation. 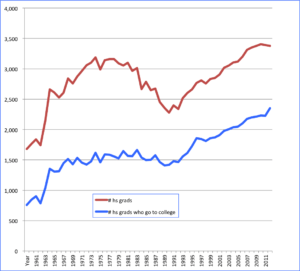 1. The population has increased.
2. More people are graduating from high school.
3. A larger percent of high school graduates are going to college.

4. Students are applying to FAR MORE schools than ever before.

We can’t control 1-3, but we can control #4, and that’s the one causing me grief. Students are now applying to 9 schools. WHAT?!?! That is actually insane – if the student is indeed applying to 9 schools. Can you imagine asking a student to write personal statements for each school all while maintaining a competitive GPA and being involved in her community and staying athletically engaged? Can you imagine researching 9 schools so well that you know what you will take advantage of on campus if admitted? Sounds ridiculous and supremely unreasonable, right?

with common applications, students have no disincentive to throw their hats in the proverbial ring at more schools. For many families the extra $25-80 to apply is no big deal so the student essentially checks the box at every school she thinks she could go to – researched or not. What was a well meaning concept of simplifying the application process has created chaos. The elite schools have three times as many applications as they did 15 years ago. There is less logic to the rejection process for most families, and reasonable candidates are too easily rejected.

What does this do for the population at large?

For my students, admittedly the very well-off with essentially limitless resources, this doesn’t change the game that much. They see the wave of applicants and we know how to navigate the process. They also know they need to invest in the process . . . early . . . because some things are not up for chance. So they find the professionals who can facilitate the process and they start as early as age 12.

At the other end of the economic spectrum, these students are getting hit, but not as hard as you may think. There are many education advocates and outreach programs that are pulling kids from so-called diversity situations. School endowments have famously risen in the past 15 years and well endowed schools have made college more accessible to strong students from meager economic backgrounds. It isn’t easy for these kids, but the admissions game has not changed against them – it essentially the same uphill battle it was before. 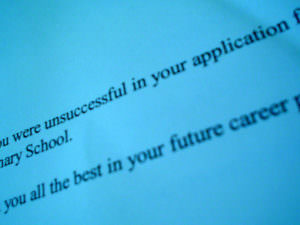 The families getting hit hardest are those in the middle.

What was once an expectation, Taylor will go to College, is now up in the air. Taylor applied to 9 schools and didn’t just get rejected at his dream schools and his super reach school, he got rejected everywhere, including his safety.

The numbers are stacked against him. He is the bulk of students applying for school. He is easy to miss. Maybe he played sports in high school, but he wasn’t good enough to be recruited (please do not hang your hopes on being recruited!!). He did pretty well in school, but not outstanding. He worked with his church on mission projects when his mom signed him up. He is “better than average” in the ways we’ve measured for college apps in the past and yet, he is too average to get in. He doesn’t stand out because he hasn’t shown enough Ummpfh in any one area. Admission officers can’t remember him and his scores are not outstanding enough to notice.

What could Taylor do differently?

First, get a life. Seriously. Figure out what you can be interested in for the long haul. That may take substantial investigation. Go beyond looking at what Mom and Dad do. Sit for informational interviews with professionals – what do they like about what they do? Second, research the schools that will specifically help you learn that subject or will connect you to the kinds of people who work in that area. Third apply only to the schools that make sense. Apply to schools you have researched and are confident can help you connect with the industry or people you want to connect with professionally. Sounds like a full time job, right?

College should be a serious process. You are taking the next step in your career. Now is the time to push, not rest.

Spend three weeks with Kate and she will get you on the right path to a successful transition to college and career.